We uncovered a role for nucleoli and PML-bodies as phase-separated protein quality control organelles that compartmentalize protein quality control factors and misfolded proteins for their efficient clearance (Mediani et al., EMBO J 2019). Failure to dispose misfolded proteins converts nucleoli and PML-bodies into a solid state that immobilizes ubiquitin, limiting its recycling for genome integrity maintenance. We are currently elucidating the quality control functions of nucleoli and PML-bodies and how dysregulation of these compartments affects genome integrity and contributes to human aging and disease. Recent studies highlighted that a substantial fraction of nascent peptides is destroyed within minutes after their synthesis by proteasomes. Some of these peptides are generated from upstream open-reading frames and globally these peptides are referred to as the “dark proteome”, being their sequence and structure unknown. This “dark proteome”, located in the cytoplasm and the nucleus, would challenge nuclear proteostasis by potentially competing with mutated and unstable proteins for folding and clearance. Its identification will uncover important molecular targets, whose handling may offer therapeutic perspectives for the treatment of protein conformation diseases, including Amyotrophic Lateral Sclerosis and polyglutamine diseases. 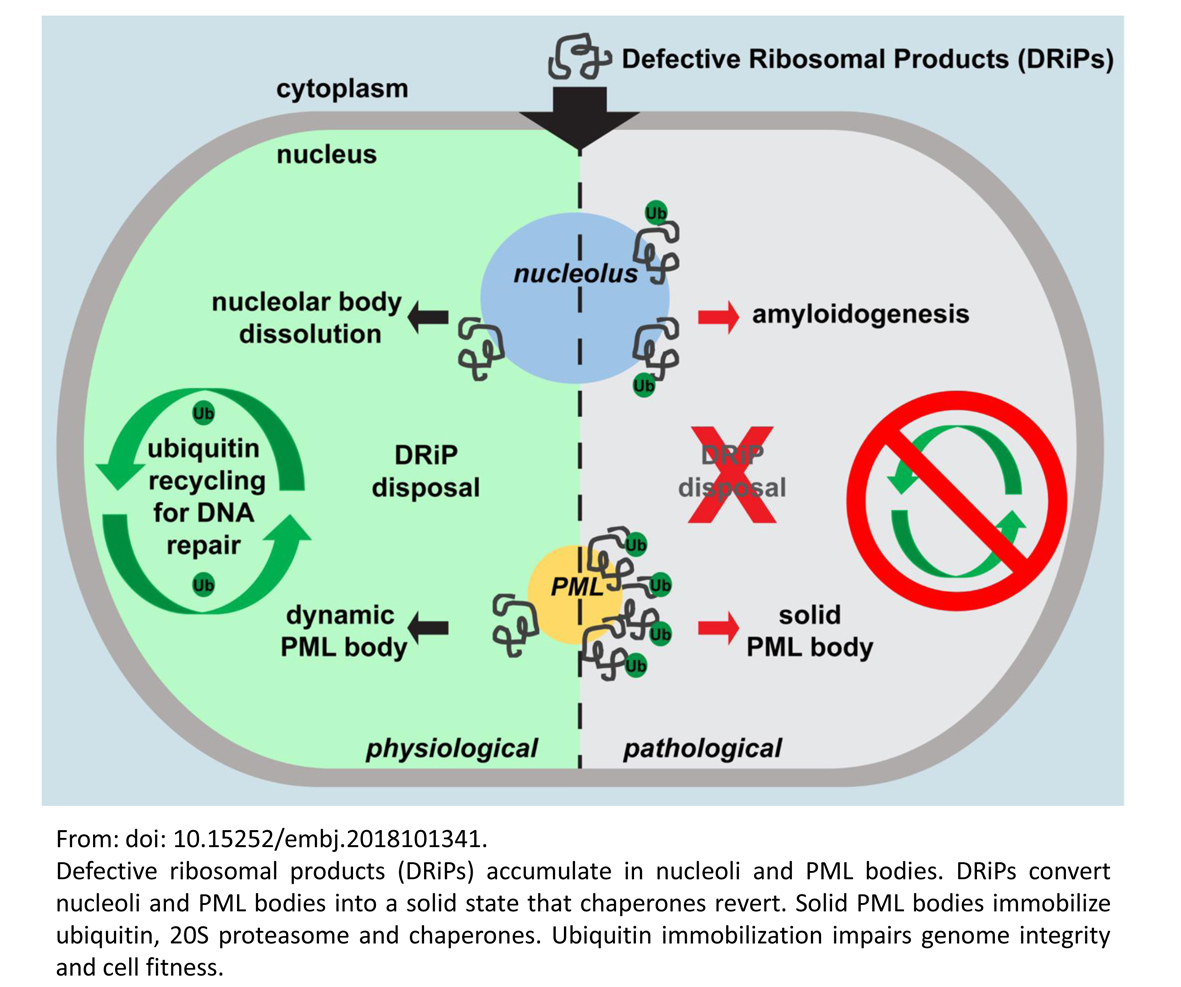 Ribonucleoprotein (RNP) granules transport, store, or degrade messenger RNAs. RNP granules are highly dynamic membrane-less compartments, which form via a process known as liquid-liquid phase separation (LLPS). However, because of aging or severe environmental stress, RNP granules, in particular stress granules (SGs), can convert into amyloid-like aggregates. There is increasing evidence that such RNA-protein inclusions are associated with several age-related neurodegenerative diseases, such as amyotrophic lateral sclerosis (ALS), fronto-temporal dementia (FTD) and Alzheimer’s disease (AD). Thus, understanding what triggers the conversion of SGs into aggregates and identifying the cellular players that control SG dynamics is critical to develop treatments for these diseases.

In the last years we provided evidence supporting the existence of an intricate connection between molecular chaperones and SGs and we propose the hypothesis that SGs are under surveillance by the protein quality control. First, we demonstrated that liquid-like SGs can sequester misfolded proteins, which promote an aberrant conversion of liquid SGs into solid aggregates. Importantly, we identified a specific protein quality control (PQC) process that prevents the accumulation of misfolding-prone proteins in SGs and, by doing so, maintains the dynamic state of SGs. We referred to this quality control process to as granulostasis. Granulostasis relies on the concerted action of the HSPB8-BAG3-HSP70 complex. Additional players of granulostasis are p97/valosin containing protein (VCP) and other molecular chaperones (e.g., HSPB1). 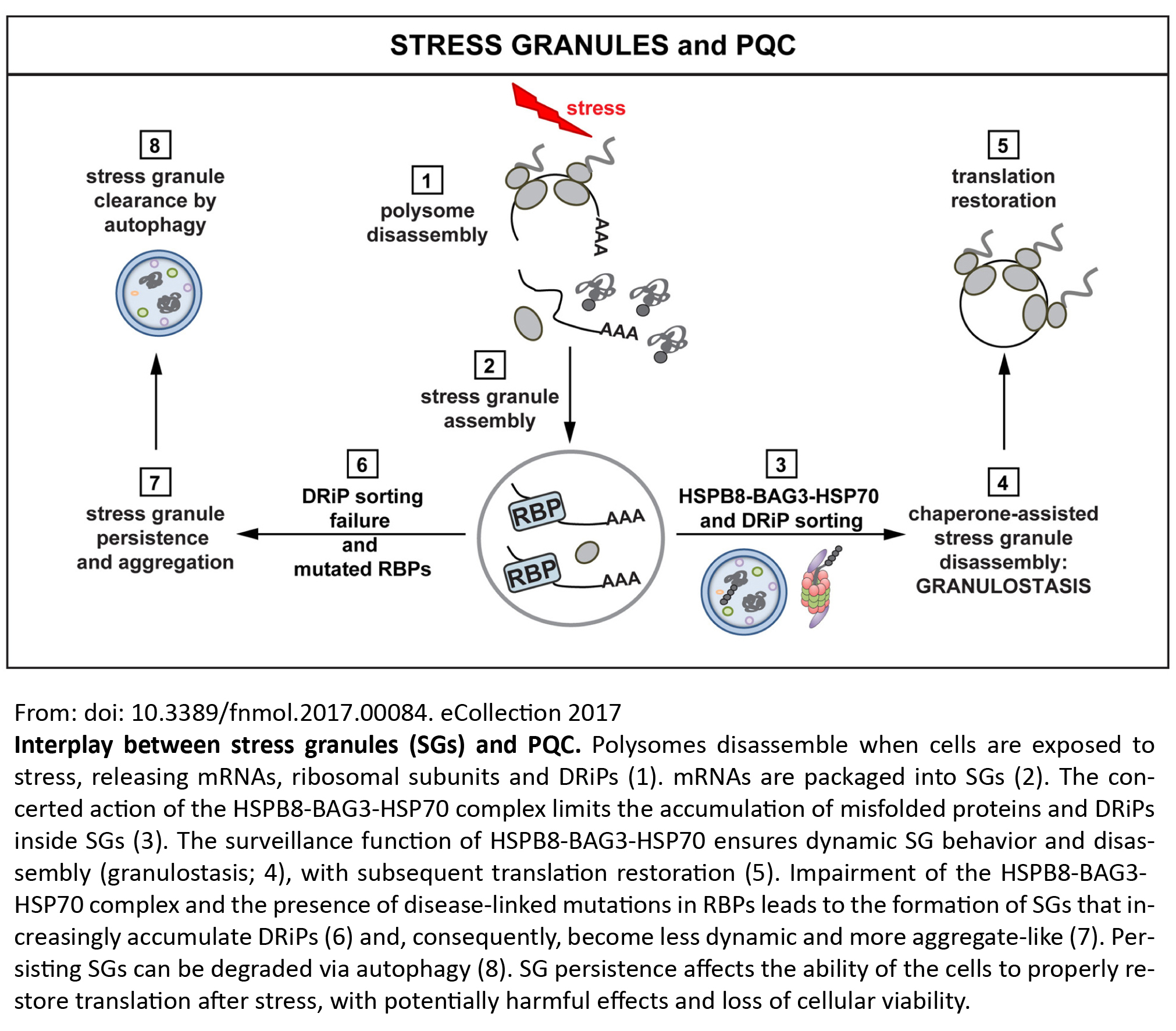 Second, we recently found that another important molecular chaperone, Hsp90 regulates SG dynamics. Hsp90 binds and stabilizes the dual-specificity tyrosine-phosphorylation-regulated kinase 3 (DYRK3), which promotes the disassembly of stress granules and other condensates. Inhibition or loss of Hsp90 results in DYRK3 destabilization, SG persistence and failure to restore mTORC1 signaling and translation. Thus, Hsp90 links stress adaptation and cell growth by regulating the activity of a key kinase involved in condensate disassembly and translation restoration.

It appears that several mechanisms are put in place by chaperones to regulate the dynamics of SGs, as well as of other types of condensates. We are further dissecting how chaperones and the protein quality control system regulate condensate dynamics at the molecular level. 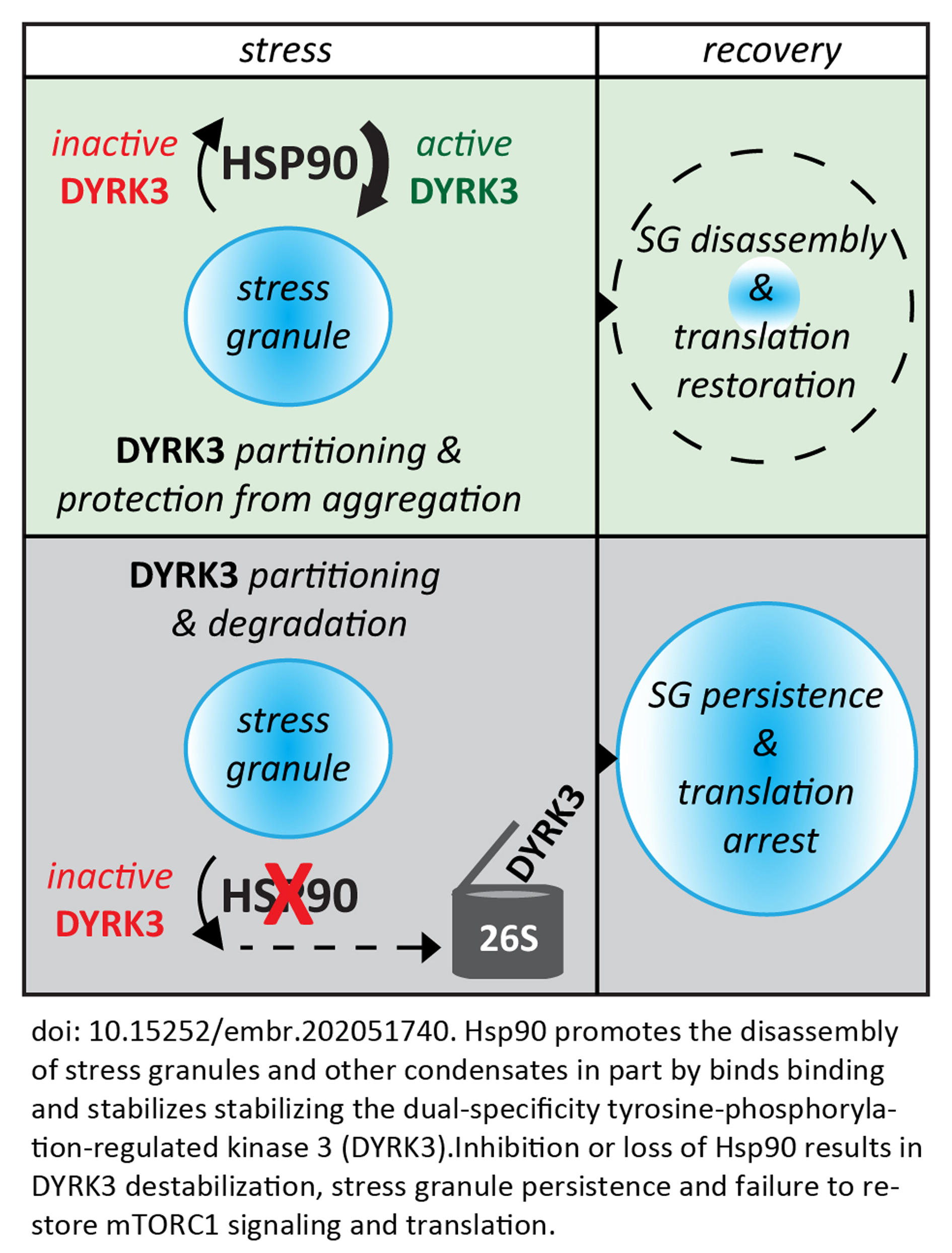 Mutations in the genes encoding for the small HSPs HSPB1, HSPB3, HSPB5, HSPB8 and the co-chaperone BAG3 have been associated with motor neuron and muscular diseases, supporting the notion that chaperones play pivotal role in maintaining healthy neurons and muscle cells.

Considering the association of RNA-protein inclusions with several age-related neurodegenerative and neuromuscular diseases, our finding demonstrating the implication of the HSPB8-BAG3-HSP70 complex in SG maintenance supports the idea that chaperones, mRNA metabolism and cellular health are linked. These observations open the possibility that the HSPB8 and BAG3 mutations linked to disease may impair not only PQC, but also RNA metabolism. Here, we follow-up our previous studies showing that HSPB8 mutations affect the formation of the HSPB8-BAG3 complex, leading to a partial loss of HSPB8 chaperone function, and that BAG3 re-routes polyubiquitinated proteins to autophagy for clearance. We will further investigate how mutations in the genes encoding for HSPB8 and BAG3 affect their function in PQC, including the study of their potential impact on RNP granule dynamics and functionality.

HSPB2 and HSPB3 are expressed in differentiated skeletal and cardiac muscle cells, where they can form a complex. These two proteins display a different localization in differentiating-myoblasts. HSPB2 forms intranuclear phase-separated condensates with liquid-like properties. Nuclear HSPB2 compartments sequester lamin A. Increasing the nuclear concentration of HSPB2 causes the formation of aberrant nuclear compartments that mislocalize lamin A and chromatin, with detrimental consequences for nuclear function and integrity. Importantly, we found that HSPB2 compartmentalization is negatively regulated by HSPB3, but this ability is lost in two identified HSPB3 mutants that are associated with myopathy.

In differentiating-myoblasts HSPB3 is enriched at the nuclear envelope. We found that HSPB3 binds to the lamin B receptor in the nucleoplasm and maintains it in a dynamic state, thus promoting the transcription of myogenic genes, including the genes to remodel the extracellular matrix. Remarkably, HSPB3 overexpression alone is sufficient to induce the differentiation of two human muscle cell lines, LHCNM2 cells and rhabdomyosarcoma cells.  Instead, mutant R116P-HSPB3 is unable to induce myoblast differentiation and activates the unfolded protein response. We propose that HSPB3 is a specialized chaperone engaged in muscle cell differentiation and that dysfunctional HSPB3 causes neuromuscular disease through a loss of regulatory function at the level of HSPB2 and by deregulating LBR and gene expression.

In this project we aim at understanding the biochemical, biophysical and functional properties of HSPB3 in myoblasts and motor neurons and how these are influenced by HSPB2 and affected by HSPB3 disease-linked mutations. In addition, we will investigate the pro-differentiation function of HSPB3 in motor neurons. 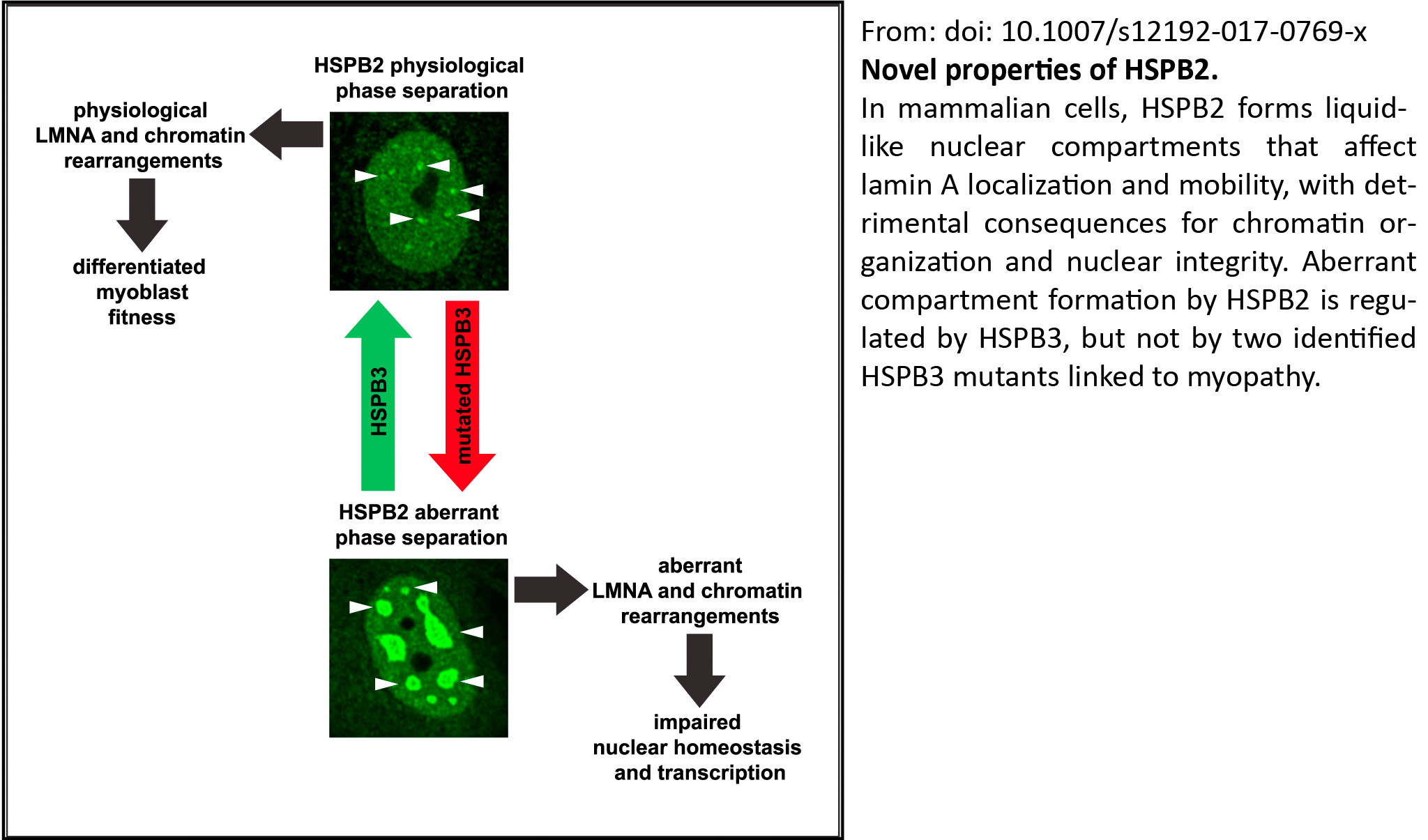 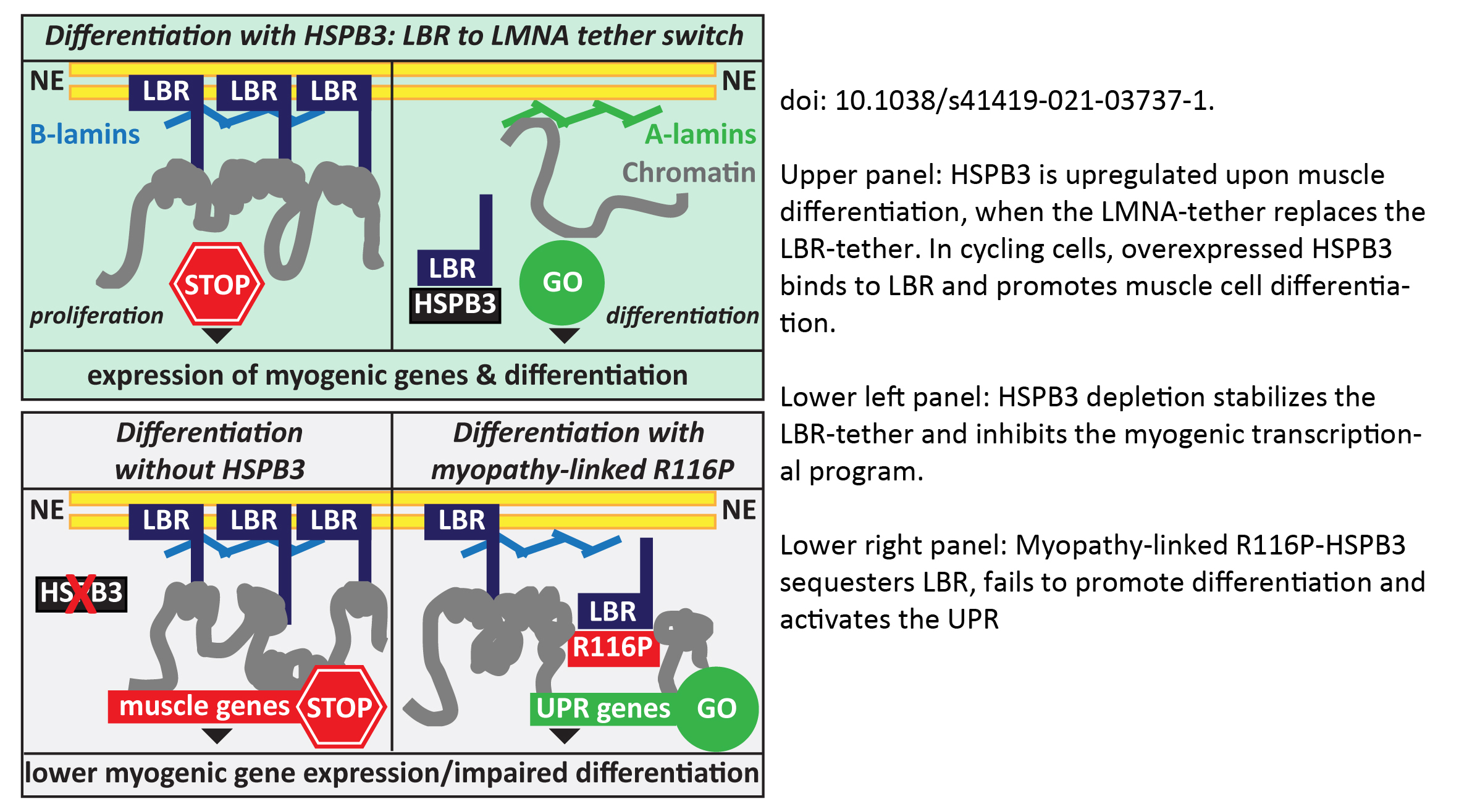